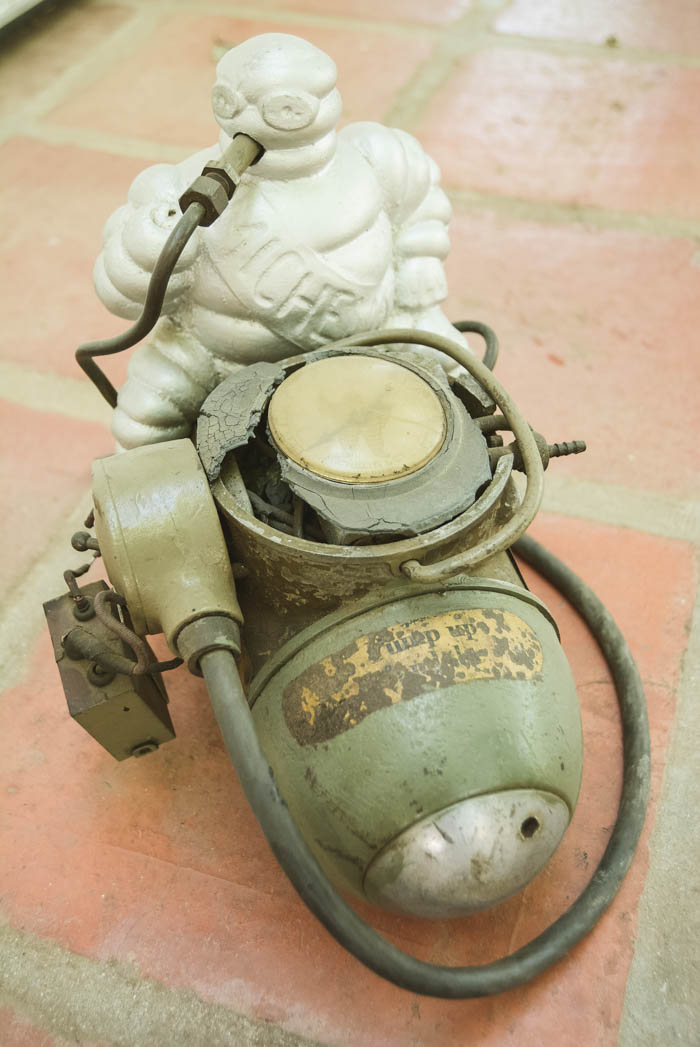 17 Feb Memorabilia and artefacts at FMM: 2

Posted at 11:24h in Museum by fmmadmin

A new series of articles by FMM Assistant Curator Cheslynne Ruiters in which he takes a look at the stories behind some of items in FMM’s collection of memorabilia and artefacts. This month he describes the birth of Monsieur Bibendum…

Édouard Michelin was a French industrialist seemed destined for a career as an artist, but around 1886 he and his older brother André, a successful Parisian engineer, returned to their place of birth, Clermont-Ferrand, to take over their grandfather‘s failing agricultural goods and farming equipment business. While duly committed to the success of the business, neither brother had the slightest idea where to even begin. Then in 1888, a passing cyclist familiar with the Michelin company, approached Édouard seeking assistance with fixing a flat tyre. Édouard took great interest in the new pneumatic tyre, and the brothers recognised that there would be a great demand for pneumatic tyres if only there was a way to make repairs. Édouard conducted a serious of experiments and developed a number of prototypes. In 1891, he was granted a patent for a detachable tyre and Michelin quickly adapted his inflatable tyres for use on motor vehicles, of which France was becoming the world’s leading producer.

While attending the Universal and Colonial Exposition in Lyon in 1894, the brothers noticed a stack of tyres that suggested to Édouard the figure of a man without arms. A few years later, André met French artist and cartoonist Marius Rossillon, popularly known as O’Galop, who was also a pioneer in animation, having created about 40 animated films between 1910 and 1927. O’Galop showed André a rejected image he had created for a Munich brewery, a large, regal figure holding a huge glass of beer and quoting Horace’s phrase “Nun est Bibendum” (‘drink up’). André immediately suggested replacing the man with a figure made from tyres, and O’Galop transformed the earlier image into Michelin’s symbol. Today, Monsieur Bibendum is one of the world’s most recognised trademarks, representing Michelin in over 150 countries.

Michelin’s headquarters, Michelin House, is situated at 81 Fulham Road, Chelsea, London and was opened for business on 20 January 1911 as a tyre depot for the Michelin Tyre Company Ltd. At street level there is a number of decorative tiles showing famous racing cars of the time that used Michelin tyres and the building has three large stained-glass windows based on Michelin advertisements of the time, all featuring the Michelin Man.

Apart from a smiley figurine of Monsieur Bibendum, FMM also has a rare old compressor depicting the Michelin Man blowing air through a pipe. He huffs and he puffs…