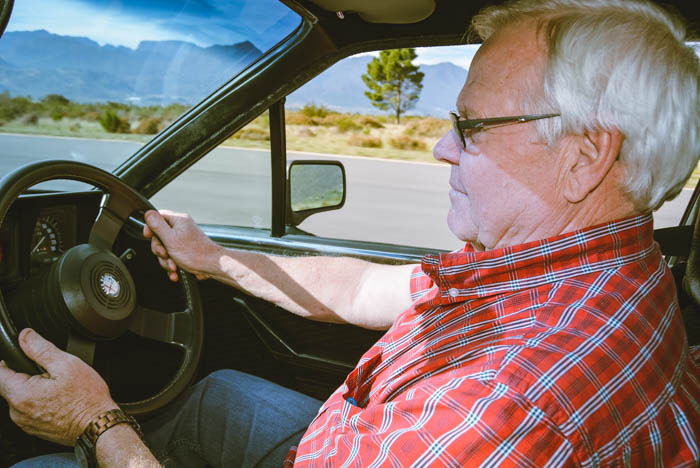 Posted at 02:22h in Museum Visits by fmmadmin

Early in July, South Africa’s multiple title-winning rally champion Serge Damseaux was at FMM to reacquaint himself with a car he once owned. Serge won 74 national rallies between 1985 and 2007 driving for (predominantly) Toyota and Ford, taking 10 SA Driver’s Championships in the process, but started his career driving privately-entered Alfa Romeos in the Western Cape. Serge also competed on the track before concentrating on rallying. Now retired, his long-standing passion for the Italian cars continues and he has both restored and built up a small collection of classic Alfas. One car he once owned but regrettably sold was a rare 1984 3,0-litre Alfetta GTV6, which the new owner, Roderick Ketterer, later put into the care of FMM. The car is in pristine, unrestored condition, and Serge quickly felt at home powering the car around PlaasPad, afterwards enthusing on just how good the car was – and still is.

The GTV6 3,0 was principally developed and homologated in South Africa for racing purposes, in particular to take on the BMW 535i in the local Touring Car Championship that was thriving in the mid-1980s. Under the guidance of Sampie Bosman, Alfa’s superb 2,5-litre V6 was stretched to 2 934 cm3 and developed 128 kW at 5 800 r/min and 222 N.m of torque at 4 300. Top speed was claimed to be 245 km/h and 0-100 km/h took 8,36 seconds. It was a great success, winning 77% of the races in which it was entered. Making the most of the car’s track record, Alfa built a limited number of road cars, and this is one of them.

Back in the mid-1970s, FMM’s media and research team Mike and Wendy Monk were part of Serge’s service crew when he was establishing his reputation driving Alfa Giulias and Giuliettas. Now together in the GTV6, Serge and Mike were soon reminiscing about the early days and just how great the Alfas of the time were to drive, highlighted by Serge quickly getting up to speed and gently drifting the Alfetta through PlaasPad’s faster sweeps. Instantly comfortable behind the wheel, Serge’s renowned car control is still apparent. Afterwards, sitting in the car, he recalled the car’s features and admired the condition of the trim. Outside, while the Alfetta’s fastback styling drew favourable comment, the stylish wheels were remembered for leaking air due to their split-rim construction. 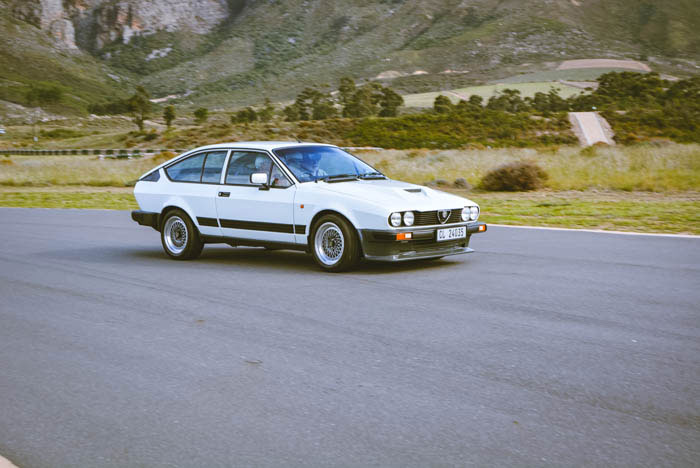