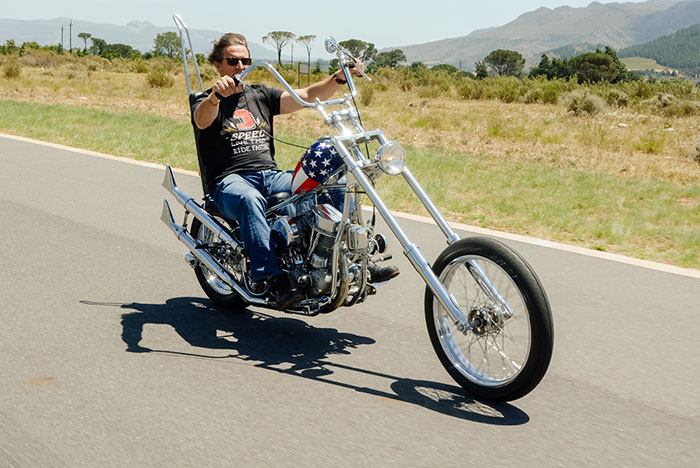 Posted at 15:15h in Motorcycle by fmmadmin

Many people will have an iconic biker movie, be it The Wild One, Mad Max, On Any Sunday or Silver Dream Racer. However, for most there is one that stands out above the rest – Easy Rider, released in 1969 and starring Peter Fonda, Dennis Hopper and Jack Nicholson. Although not all may remember the full extent of the story line, boy oh boy do they remember the two motorcycles – choppers, to be more precise – that were used in the making of what became a landmark movie. The more famous of the choppers was nicknamed Captain America, the other known as the Billy Bike, and both were custom built just for the movie.

Easy Rider’s ‘free soul’, anti-establishment theme was even carried over in the building of both bikes. Fonda was quoted as saying that he used seven chaps from Watts, a suburb of southern Los Angeles, to build them, and if you study American history you will find that Watts was a very unsettled place back in the Sixties and not the place you would expect Hollywood to be building motorcycles. Two of the names associated with building the choppers are Clifford Vaughs and Ben Hardy, but it is not mentioned if they were ever part of the mystery seven. To this day, there is still controversy as to just who was the true creator of Captain America and the Billy Bike. However, what is undeniable is that both Captain America and Billy Bike started their lives as 1964 Harley-Davidson pan-head police-issue motorcycles – “another dig at the man” as they would say – and are probably the most famous motorcycles in the world today, especially Captain America.

The tribute machine featured here is on loan to FMM by a private individual who commissioned the bike and it is a nut-and-bolt copy of the real machine, right down to the last millimetre. The original Captain America was constructed with no regard for handling or safety, but rather “it was all about the aesthetics” claims Fonda. This example has kept to the original formula in so many ways, with its front forks that stretch out in front of you at the same 42-degree angle, the higher-than-shoulder-height ‘ape hanger’ handlebars (which I believe are illegal in the USA today), super-high sissy bar and, just like with the original, no front brake and a pathetic excuse of a rear brake. Special attention was paid to small details such as the hooter and ‘mouse trap’ clutch mechanism.  The studs on the seat are correct US Air Force dress uniform buttons, chromed as the original. Even the mirror is an exact replica and only good enough for looking at the bugs in your teeth.

But what really separates this from many of the other tribute machines that are available is the lack of an electric starter. This is such a cool aspect, and for those of you who know me will know by now that this is old school at its best … kick-starting a Super Stock pan-head Harley – or any bike for that matter – is so ‘my thing’.  I must admit that the Super Stock mill fitted to the tribute chopper has to be a big improvement over the original FLF 74 motor fitted to the movie chopper, as those old pan-heads were synonymous for not starting easily. Starting this 1340 cm3 V-twin takes some physical effort, but if you time it correctly and use just enough choke, the big V fires up with that powerful deep note that is so unmistakably Harley-Davison, the fish-tail exhausts topping it all off so nicely. The owner informed me that when he presented the bike to Peter Fonda, he was blown away by just how close this machine is to the movie machine.

Riding a full-on chopper was a new experience for me, and believe me I’ve ridden a few strange bikes in my life. I discovered that until you are moving at about 40 km/h and have good forward momentum, the chopper is very unstable. This is due to the long fork and its crazy rake angle; also the turning radius is ridiculous so you need a good open area just to turn around.  What also does not help with stability is the fact the seat is low and mounted directly to the rigid frame with NO rear suspension. This, in turn, causes your body to hop and bounce around, the movement also affecting the stability, which means you’re constantly correcting and counter-balancing. Heck, it is so much fun! When it comes to stopping, let me say that it is just as much of a challenge as you only have a foot-operated rear drum brake.

Now I need you to visualise this, please. You have your feet way out forward of your centre of gravity, your arms are way up above and ahead of your shoulders, your backside is only an inch or two away from the back wheel and you use your right foot to depress the brake. All easy enough until the speed drops and the chopper starts to get to that super unstable stage. You have to remember that you can only put your left foot out to stabilise yourself as your right foot is pressing the brake… This is not that simple if the chopper decides to tip to the right just before you can come to a complete stop as you can’t take your foot off the brake pedal, so you quickly learn to lean and shift your weight to the left so that you have a controlled stop. Oh, do not even ask about pulling off on a hill…

Nevertheless, after 15 minutes in the saddle, it all becomes second nature and you can start giving the chopper a little more gas. The Super Stock has plenty of power and you only need a handful of revs to move off the line with all 55 hp (41 kW) available at only 3 000 r/min. This is, and always will be, a cruiser, so power is more than enough and 120 km/h is reached with ease and you can stay in top gear almost all day long or as long as your butt can take the punishment.

This might not have been the real Captain America but I must say it’s darn close, and being privileged enough to have got to ride this tribute chopper was fantastic. I can only end with Dennis Hopper’s words, “ya gotta dig it,man”.