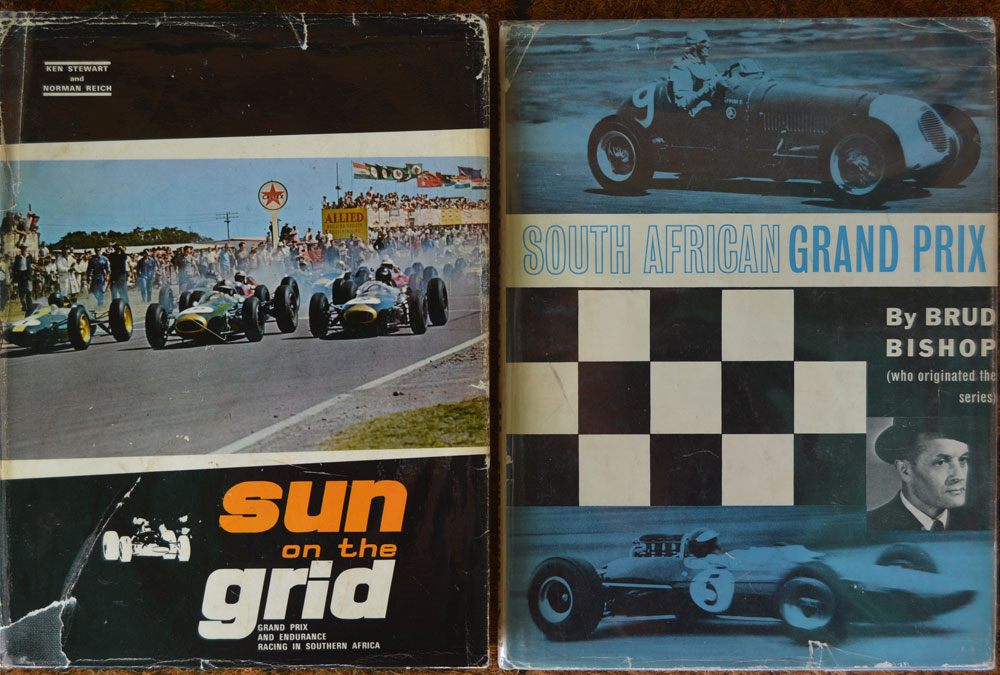 31 May Between the covers

Posted at 22:13h in Museum by fmmadmin

While the usual Memorabilia column is taking a short lockdown break, we are introducing this new, additional feature series that focuses on motoring literature of interest to FMM’s followers. Hosted by Wendy Monk, we start with a pair of books from the FMM library shelves that reflect the pioneering days of South African motor sport…

Not since the days when gladiators raced around a stadium in ancient Rome had there been a vehicle that could stir up enough passion to cause one man to challenge another to do it again, until the invention of the horseless carriage in the 19th century. And there were those who wanted to race and others who wanted to write about it.

Today, races still take place in stadiums full of spectators, but the sport has expanded to become a multi-faceted global phenomenon with world-wide media coverage. But back in those early days there were no motoring writers, only journalists co-opted to go to the events, watch the racing and bring it all alive with their imagination and the written word. Club magazines and motoring periodicals such as The Autocar, which started in 1895, followed by The Motor in 1903 and, in 1925, the more specific MotorSport, which evolved from The Brooklands Gazette, came next, and it was inevitable that books would follow. Here in South Africa we were lucky, as we not only had great racing, but great writers too, so to kick-start this series of reviews I have chosen two books, both iconic in their own way and invaluable to researchers, even now.

The first book, Sun on the Grid by Ken Stewart and Norman Reich, was written in 1967 and sets out to introduce the reader to the ‘new craze’ for the horseless carriage. It goes on to describe how, in 1934, such world famous international drivers as Whitney Straight and Dick Seaman invited themselves to the country’s first international race at a new, purpose-built track in East London.

The book grows in stature as it goes on to describe the drivers, both local and overseas, who subsequently raced on all the circuits that sprang up in South Africa, from the not-so-charismatic Pollsmoor to the Lord Howe Circuit and, later, Roy Hesketh, Killarney and Kyalami, to name a few. The vivid descriptions of the races, most classified as grands prix but some as trophy races, are supported by many photos, most of which were taken by Ken, and even informs where a few of the cars ended up. What sets this book apart is the amount of information given; entry lists, engine capacities, handicap times, results and what happened to non-finishers.

At the back of the book there are appendices chronicling the first ten 9-hour Endurance Races along with tables of results of each of the main races from 1934 to 1967, layouts of the tracks, and pen-pictures of some of the more famous drivers. Ken and Norman were the trail-blazers and while other books followed, Sun on the Grid is the first book I pick up when carrying out research on early motor racing in South Africa.

The second book, South African Grand Prix, was written by Brud Bishop, and when I first read the introduction to his book I nearly put it down, as I don’t like romance novels. To quote a passage, “The whippy breeze that streams in constantly off the Indian Ocean at East London stirred her dark, lustrous hair. She stood up in my open car and swept the horizon with binoculars”. Brud was actually looking at a piece of ground in East London and thinking “what a fabulous motor racing circuit this would make”. But he took too long and his lady friend grew impatient and dumped him – no shared vision there.

Her loss was South Africa’s gain as Brud had been visualising a grand prix track and subsequently went about gaining the necessary permissions to build it, find finance and attract racing drivers both local and overseas to take part. His book, which was published in 1965, is simple and easy to read and details, in his wonderful prose, how it all began, who the drivers were, the cars they drove and, yes, he name-drops outrageously. Originally, the race was to be called The Border 100, but quietly his newspaper articles began to call it the SA Grand Prix – and he got away with it.

The Marine Drive circuit that Brud originated in 1934 measured 15 miles 537 yards (24,59 km) and, as he acknowledged, “was absurdly long but fantastically fast”. This was the first Grand Prix race attempted over public roads and, as there was no official practice, the first of this seven-lap race did not count in the race as it was seen as a practice lap for the drivers to familiarise themselves with the circuit. News of the proposed race travelled fast and attracted two very expensive overseas drivers, the charming Whitney Straight and Dick Seaman. This was no slur on local drivers such as Sonny du Toit and Dougie van Riet, but necessary if top overseas drivers were to follow and make any future race a success.

Brud recognised the help he received from everyone he asked and orchestrated a very successful and memorable race in front of 42 000 spectators. The following year the circuit was reduced in size to 11 miles 57 yards (17,76 km) and called the Prince George Circuit, and Brud made it more thrilling by incorporating a hill. This story is told in his lyrical style, along with a number of pernickety observations. I particularly enjoyed “a few sportsmen were such prima donnas and uncooperative because they had received too much adulation”, and the one he tells on how he had to “slap down some of my overseas drivers if I wanted to keep control”. Priceless. I wonder how he’d get on with the drivers today… 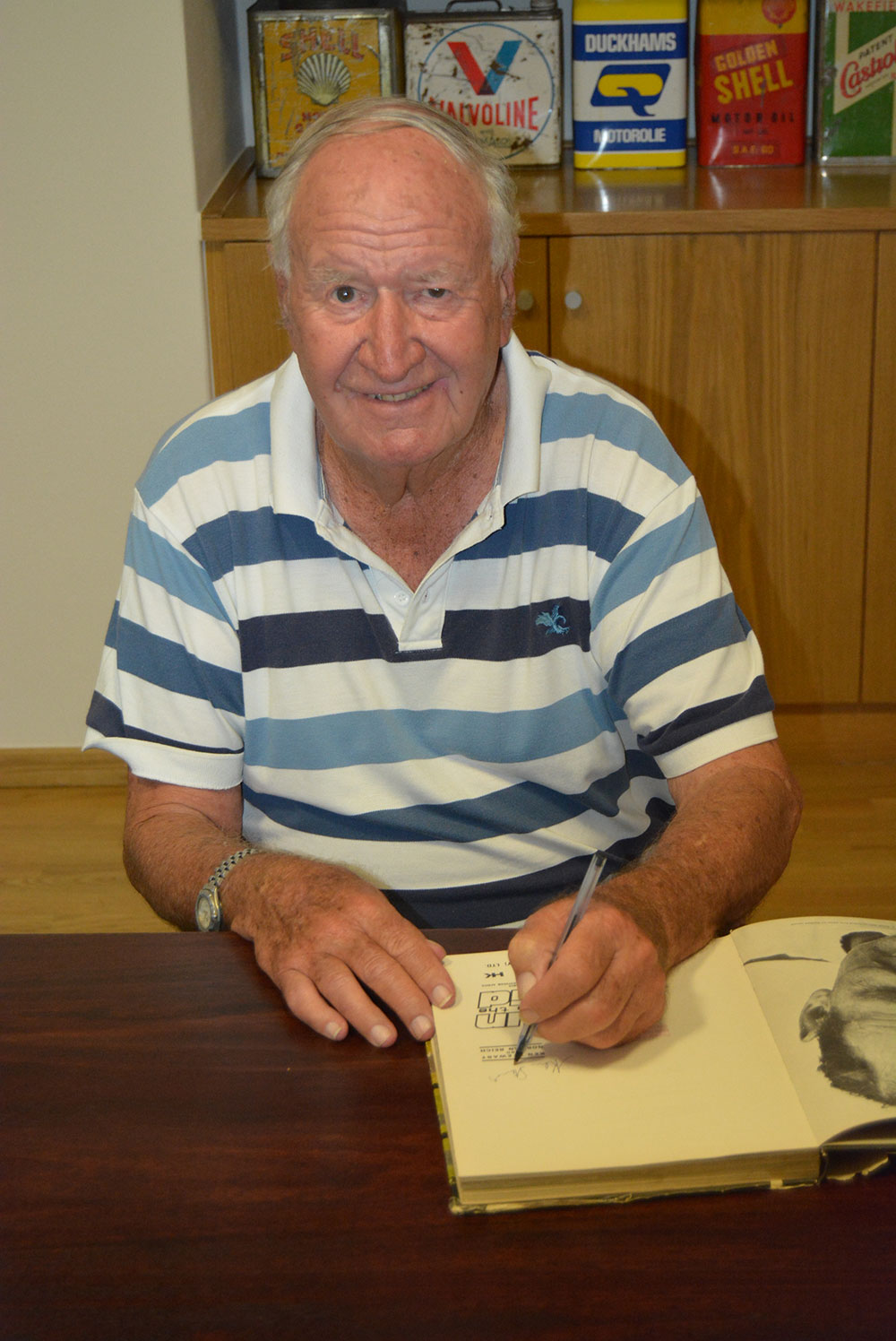