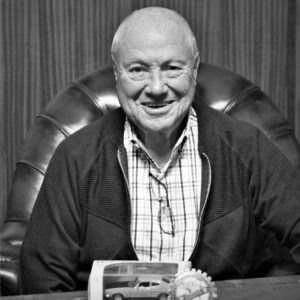 Posted at 15:32h in Newsletter by fmmadmin

As reported in the last newsletter, Basil Green passed away in June and this month Mike Monk pays tribute to the man behind the iconic Perana, and recalls an interview he had with Basil back in 2013.

Basil started his career as an apprentice mechanic and passed his NTC3 before moving to the then Rhodesia to work in the copper fields. Later, he answered a British newspaper ad placed by Dr Luis Monteiro for a mechanic for his Cooper-Climax F1 car and got the job. Once in Britain, he did a course at Coventry Climax to learn about the engine, which was a particularly finicky design. “I ended up becoming an engine man and spent a couple of years in the UK,” recalls Basil, “but did manage to drive the race car occasionally.”

Basil returned to SA and set up BG Speed Equipment specialising in modifying production engines. The premises had its own foundry so was able to produce custom manifolds, a cam grinding machine that was run by Richie Jute, and also boasted a rolling-road dynamometer. Green also made wheels, originally with cast aluminium centres and steel outer rims, before moving onto full alloys.

But the big business was in supplying modification kits, many of which we exported to Britain and Australia, Basil recalled. “We then moved into engine conversions and transplants. As an aside, V8 and transplant guru Willie Hepburn was an apprentice mechanic at Green’s workshop at the time.

To showcase his talents, Basil started off racing a Mini 850 that he stretched to 1000cc (before BMC introduced the Cooper) and was successful in hot rod racing at the old Wembley. He then switched to a Ford Anglia to which he fitted a 1500 Cortina motor enlarged to 1640cc and boasting a Green-cast twin-cam cylinder head. This car was also victorious, particularly at hillclimbs, but was wrecked in an accident in the 1966 9-Hour at Kyalami. The motor was transplanted into a Fiat 600 drag racer that was an instant Top Eliminator winner.

Basil was then able to fulfil a dream by creating a V6 Cortina. Not workable with the Mk.1 model, the launch of the Mk.2 made the transplant possible and the prototype heralded the birth of the Perana name, which was thought up by either Basil’s wife or daughter – no-one is certain! The Cortina Perana was deemed too quick and powerful for production car racing and was obliged to run in sports cars.  The conversion proved a master stroke and, as well as complete cars, kits were sold. Gunston was impressed with the concept and ordered a large number of cars for its reps, the deal helping to secure the future of Basil Green Motors. The Perana legend was up and running – fast…

The Capri Perana project came about in the late 1960s when Ford SA was sponsoring Bobby Olthoff internationally with the Willment team. Green had got to know Ford’s top brass through the Grosvenor Ford dealership, which was the main selling outlet for the Peranas. Ford asked Green to put something together and coincidentally the Capri had just been launched locally. Green measured it up and asked for some parts to build a prototype. Ford SA top brass enthusiastically backed Basil’s proposal and promised full financial backing, so Basil set up new premises in Plantation Road, Edenvale and began work on the prototype.

The outcome? Total domination! Painted in Team Gunston’s distinctive burnt orange with contrasting striping, X181 (the car’s allocated race number for the new season) was ready to do battle. Olthoff and the Perana won the 1970 championship by winning 12 of the season’s 13 races.

Sadly, the world’s 1973 fuel crisis brought about a temporary global demise of performance cars and the ‘big into little’ engine transplant side of Perana’s business was a victim. However, despite this major setback, the Perana name was firmly entrenched in South African motoring history and the legend lives on to this day.

Road-going Capri Peranas (based on the 3000XL) were South Africa’s No.1 muscle car of the ’70s. In standard form the V8 pumped out 150 kW but there were 186 kW and 220 kW (at 5 800 r/min) versions, the latter with around 270 N.m of torque at 3 500 r/min that helped realise a 0-100 km/h sprint time of 6,7 seconds and a top speed just shy of 230 km/h. Sitting on lowered suspension with stiffer springs up front, the Capri Perana rode and handled extremely well. Only the standard brakes with harder pads were suspect, being prone to fade quickly with hard use. 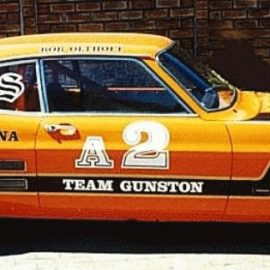