Posted at 19:27h in Museum by fmmadmin

In 1921, the first French Grand Prix since WW1 was held at Le Mans. American Jimmy Murphy won the race driving a Duesenberg Model A, a victory that was said to be in no small way due to the car having hydraulic brakes: it was the world’s first production car to be so equipped. As a quick aside, it is interesting to note that after doing a demo lap preceding this year’s Le Mans 24-Hour, Fernando Alonso reckoned that today’s circuit was too fast for current F1 machinery…

Another automotive innovation appeared a century ago, also in France, when Sizaire-Fréres exhibited a car with all-independent transverse-spring suspension, the Type 4RI, which went into production two years later.

Stateside, William C Durant, who had made Buick the best-selling automobile in America and co-founded both General Motors and Chevrolet – along with acquisitions of numerous other brands – went out on his own and established Durant Motors.

At the Berlin Auto Show, Edmund Rumpler exhibited an extraordinary car with a low drag coefficient – “and of astonishing ugliness”. Only a few of these Rumpler Tropfenwagens were produced.

Although American company Chadwick Engineering had produced a number of supercharged cars before WW1, in 1921 a Daimler-Benz team with assistance from Ferdinand Porsche were the first to install superchargers on some Mercedes-Benz production models. 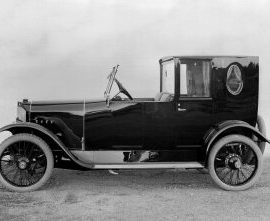 Sorting through a collection of old photos recently, this superb image popped out and simply have to share it with you. It is of Pedro Rodriguez driving  the 1967 Cooper-Maserati Type 86, which is powered by a 2 998 cc V12 delivering 380 kW at 10 000 r/min mated with a Hewland five-speed gearbox. Tyres were Firestone, fuel and oil by BP, plugs by Champion,  and Brakes by Girling with Ferodo linings.

Things sure were different 54 years ago…