Posted at 20:13h in Museum by fmmadmin

In 1901, three noteworthy cars made their debut. First was the 5,9-litre 26 kW Mercedes, designed by Wilhelm Maybach, and built by Daimler. The first car to be built on a pressed-steel chassis, it featured a honeycomb radiator and also pioneered mechanically-operated inlet valves, low-tension ignition, and a ‘gate’ gear change. Named after Mercedes Jellinek, the daughter of motor sporting personality Emil, the car is considered by many to be the forefather of the modern day motor car.

The second debutant was the Lanchester Model 10, which was powered by a centrally-mounted, horizontally-opposed, air-cooled 4,0-litre 7,5 kW twin-cylinder engine mated with a three-speed epicyclic gearbox with pre-selector first and second gears, both components boasting automatic lubrication. Like the Mercedes, the Lanchester was designed from the ground up as a motor car, rather than an adaptation of a horseless carriage.

Third in the list was the Curved Dash Oldsmobile runabout, the world’s first mass-production automobile. It had a 1,6-litre single-cylinder engine that put out just 3,4 kW at 600 r/min and a two-speed planetary transmission. Remarkably, in 1904 William Letts and British racing driver and businessman Charles Jarrott drove a Curved Dash Olds along the tram track to the summit of Snowdon, the highest mountain in Wales. And part of FMM’s collection is a 1904 example, which is currently on view in Hall A. Take a look and marvel at what the two men achieved… 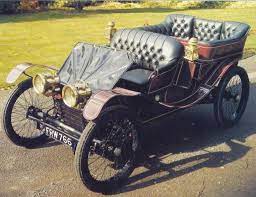