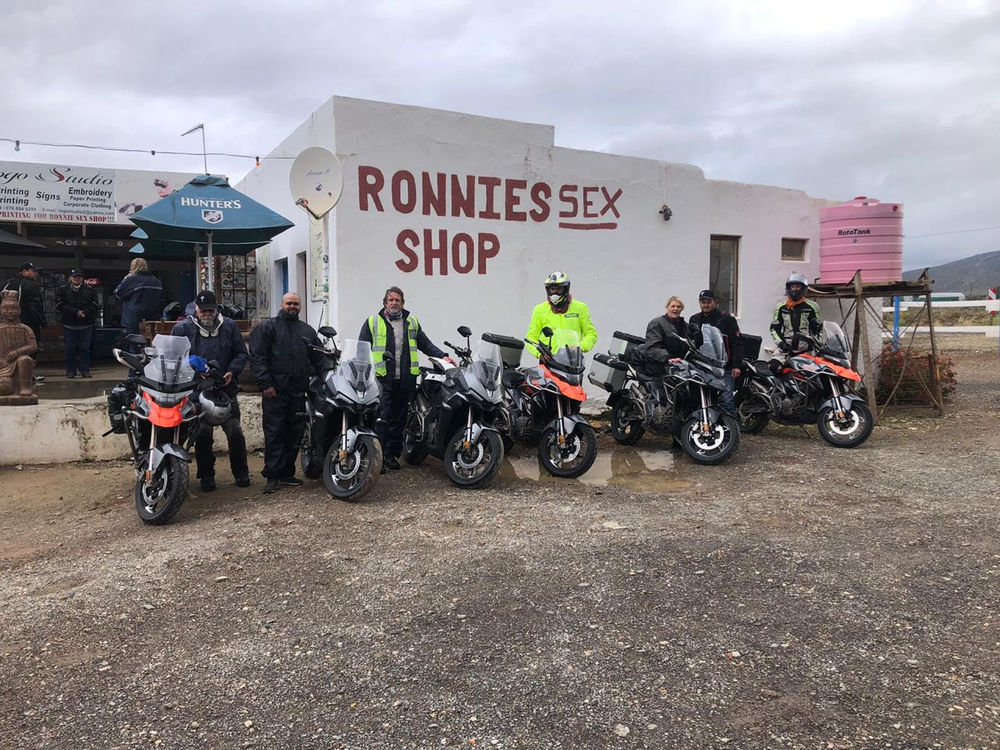 03 Nov On yer bike: To the Hell and Back

Posted at 14:53h in Motorcycle by fmmadmin

One of the wettest and windiest Fridays in recent history greeted me on October 1st. My alarm clock had been set to 5am, but I had been awake an hour before listening and praying in the hope that the Cape storm would blow over. The reason for my anxiety was that I had entered a Zontes Motorcycles sponsored Bike Route’s Tour aptly named ‘To the Hell and Back’ and, judging by the weather Hell had already descended upon on us…

As I had already packed my bike with all the necessary equipment needed to survive my trip to the Hell – a tent, mattress, sleeping bag, dry clothes etc – I was not easily going to back down from this challenge, especially as it involved riding motorcycles. Plus I was also going to attempt this tour on the saddle of a Zontes 310-X, and I was rather excited to be riding my first Zontes. Going on its looks, it appeared very capable and was aimed at the new small-capacity sports tourer market along with the likes of the BMW 310 and Kawasaki Versys-X 300.

So, braving the elements, with mixed feelings of excitement and some trepidation I straddled the machine and hit the start button – no key needed on these models, just the fob in your pocket and you are ready to go. The powerful 310 cm3 engine kicks into life with a somewhat disappointing engine note. With its very sporty and aggressive lines, maybe Zontes could have given it a voice to match… In the dark, the TFT display is light and clear and the LED headlights were more than enough to light up the cold, wet and very windy conditions. As I drove down the deserted streets of Franschhoek, I knew I was in for a tough ride as the wind was gusting around 60 km/h and trees were being blown over. The Zontes only weighs 159 kg and strong crosswinds push you around easily, but on the open road I found it a little better at speeds above 80 km/h. However, there were times when I was doing my best Valentino Rossi impression, hanging off the side of the Zontes with my knee out just to travel in a straight line.

As I headed to the tour’s gathering and starting point in Somerset West via the Helshoogte Pass, the rain came down in sheets with rivers of water rushing across the road. In such inclement weather, the tyres on the Zontes did a fair job at lower speeds but tended to aquaplane in the very wet patches. I was happy the 310-X came standard with ABS brakes, although I found the lack of feel and feedback from the brakes a little disconcerting in the wet. As I left Stellenbosch, the weather started to clear a little and I could enjoy the 310-X and did not have to fight off the elements. At the starting point I was happy to see I wasn’t the only drowned rat as, one by one, the other tour members appeared out of the dull grey morning. We all quickly completed the mandatory documentation and I was able to pack my extra luggage into one of the support vehicles, which was most welcome as it did free up my riding position and the bike’s balance.

Finally, we were on our way and set out over Sir Lowry’s Pass to Grabouw and on to Villiersdorp. And still the rain poured from the heavens. Thankfully, the wind had died down a lot and I was able to see just how sure-footed the 310-X was in the wet. The steel-tube chassis is sound and you can push on a fair amount before you feel the rear tyre letting go, but I think this might have been down to the CST 17-inch radials Zontes had fitted as standard, as the suspension is also more than up to the task. We pushed on to Montagu and lunch at The Rambling Rose restaurant where the warm food, hot coffee and toasty fireplace was just what the doctor ordered.

After lunch it was time to fill up and I was pleasantly surprised to find that the 15-litre tank was nowhere near as empty as I thought. The fuel consumption is claimed to be 3,2 litres/100 km and I calculated that my figure so far was around 4,1, which still wasn’t too bad considering the wind and the pace we were travelling at to keep up with the bigger German adventure machines. But there was no time to ponder on fuel consumption as we pushed ahead, as the day was fast drawing to a close. There was a mandatory pit stop at Ronnie’s Sex Shop for a photo shoot and refreshments before moving on to Ladysmith and Calitzdorp for a final top-up of our fuel tanks. Finally, we turned off the R62 onto a dirt road heading towards Buffelskloof and Gamkaskloof.

This is what the boys on the Zontes 310-T Adventure bikes had been waiting for as, although the 310-X and 310-T are, in principal, the same machine, they have different body panels, tyres and riding position, which gives the Ts an advantage along the dirt tracks. Nevertheless, the 310- X handled the mud and lack of grip rather well. Arriving at our overnight stop at Kruisrivier camping site later than expected and in the dark, I was relieved that I had not fallen or damaged the bike in any way. After a good old South African braai supper and a glass of red wine it was time to dry off, warm up and get some sleep…

Day 2 started early with hot coffee and rusks, followed by eggs and bacon and then the bad news was delivered. I would not be riding into Hell as the roads were just too bad and sponsor Zontes was not in favour of risking the 310-X on bad roads in the very wet conditions. So I hitched a ride with a service van for the rest of the journey – “humph, ja , well, no, fine” – but it did give me the opportunity to see some of the most amazing countryside the Western Cape has to offer. Die Hel has a fantastic history, and if you are into ‘off the beaten track’ touring or in a 4×4 or even on a motorcycle, then it this is well worth the visit.

What was great to see is just how well the small 310-T coped with the different weather and road conditions, keeping up with German adventure bikes that are a yardstick for most other brands. At times I thought that the advantage of only weighing in at 160 kg works on tighter, slower trails where the rider doesn’t have to work so hard. By the end of day two I was suitably impressed at the Zontes 310-T off -road capabilities and, listening to the banter around the fire that night, it was clear that many of the GS riders in the group were similarly impressed.

Day 3 dawned with beautiful clear skies and the promise of a great trip home. After another excellent breakfast courtesy of our sponsors Zontes, we broke camp, packed the bikes and hit the trail home. It was great to be back in the saddle and I was looking forward to going through some exciting mountain passes that made up part of the route home. On the R62 the road takes you through the Huisrivier Pass, which is a well surfaced road with long sweeping curves and a few tight hairpins. You can see well ahead, which made for an ideal piece of road to see just how dynamic the 310-X is. It was on this section I hoped to stretch the legs of the Zontes, which is at the top end of the power scale with 26 kW and a claimed top speed of 160 km/h. However, ascending the Pass I realised there is lack of power. The roadholding in the dry is good, and 37 USD front shocks along with nitrogen mono-shock rear suspension instill a lot of confidence. The CST tyres work well in the dry but I would still upgrade to a more reputable brand.

In Barrydale, we had a pit stop at Diesel and Cream for milk shakes and then on to the awesome Tradouw Pass, again a beautiful part of the Western Cape and definitely worth a visit on a bike or even in a car. It is a tight and technical pass and one must be careful, but you can still have fun. Once again I found the brakes a bit lacking and the harder I pushed the longer the travel on the lever became. This was also the last opportunity I had to give the Zontes a good push, as from then on it was the N2 all the way home to Franschhoek.

The Zontes 310-X is right up there with all its competitors with regards power and performance, and is well-priced at R72 900. There are a few build quality issues and then there are those brakes. On my smile-o-meter it’s not quite ear-to-ear but it did definitely bring a happy grin to my face. Special thanks to Liesel and Carlo at Zontes South Africa for setting me up with a test machine, and to Justus for inviting me along on bikeroutes.co.za. 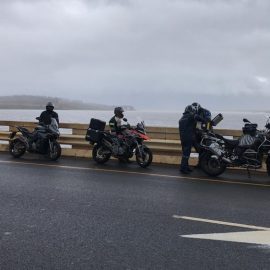 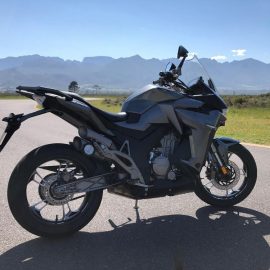 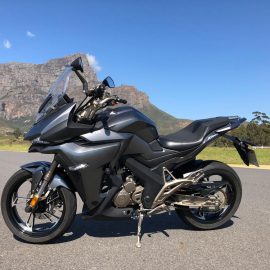 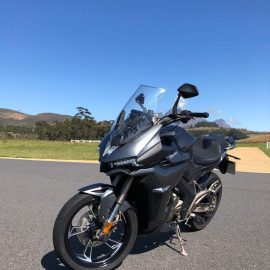 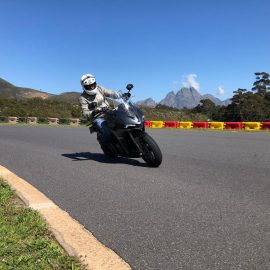 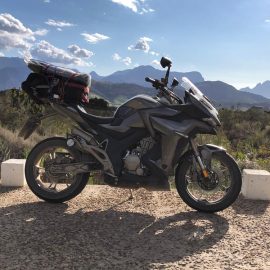 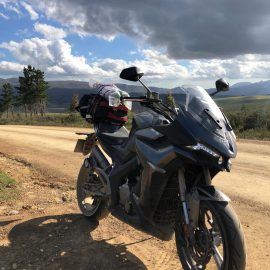 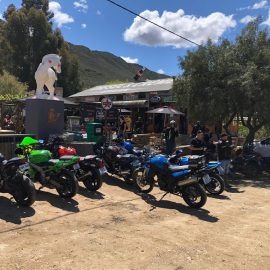 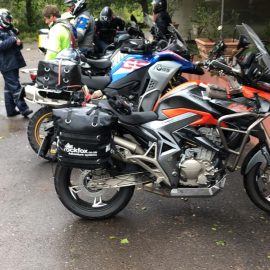 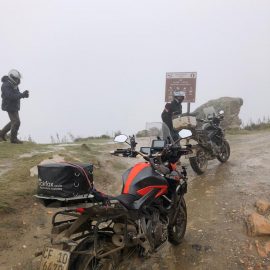