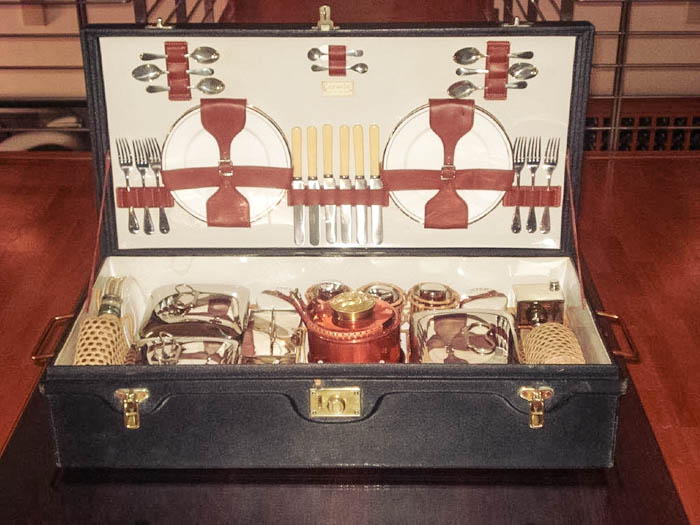 Posted at 17:18h in Museum by fmmadmin

A new series of articles by FMM Assistant Curator Cheslynne Ruiters in which he takes a look at the stories behind some of items in FMM’s collection of memorabilia and artefacts. This month, inspired by one of the museum’s vintage picnic sets, he looks at ‘food to go…’

Up until the mid- to late-1880s, picnics were primarily a pursuit of the wealthy. Working men and women barely had enough means to scrape together a proper meal indoors, let alone pack up a feast and go. But the Victorian era saw the picnic concept cross class boundaries. A picnic was conceived as a fashionable social entertainment in which each person taking part contributed a share of the fare. The English word picnic comes from the French term ‘pique-nique’, which was used from the mid-1600s to describe gourmands (food lovers) who brought their own wine when dining out. But elegant meals outdoors were probably first eaten during the Middle Ages… The earliest picnics in England were medieval hunting feasts. Hunting conventions were established in the 14th century, and the feast before the chase assumed a special importance.

The advent of the automobile opened up a whole new world of opportunities. Picnics are often family-oriented but can also be either an intimate occasion between two people or a large get-together such as a company and church gathering. On romantic or family occasions, a picnic basket and a blanket are usually brought along. Family road trips were synonymous with three things; playing games, competing to be the first to see the sea, and ‘padkos’. ‘Padkos’, or ‘road-food’, is often the favourite part of the journey and the most loved items were pork sausages, boiled egg and mayo and bacon and egg sarmies – and not forgetting some biltong. Milky tea in a flask was packed for longer trips, whereas for shorter trips a few bottles of frozen water, which thawed rapidly along the way, were the main refreshment. LiquiFruit, and even before that Capri Sun, were kept in a cooler box. Happy times…

The idea of creating a drive-through restaurant was sparked by the popularity of the automobile. Business-minded individuals took advantage of the situation by opening up fast food restaurants such as McDonalds (est.1940) and KFC (est.1952), which have taken away the individuality of the classic picnic. Times have changed…