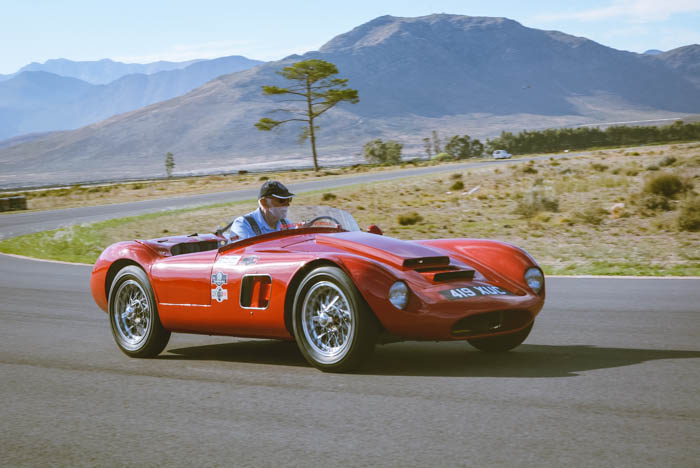 Posted at 09:14h in Collection in Action by fmmadmin

The 2017 Le Mans is on the horizon and to whet the appetite for this classic endurance race, Mike Monk could not resist the invitation to drive a Moretti, the likes of which raced at the Circuit de la Sarthe in 1956.

Giovanni Moretti was a skilled motorcycle mechanic who had started his own workshop in Turin in 1925. His competition background led to the production of small sports cars in 1947, starting with a twin-cylinder 350 cm3 minicar called Cita before upgrading to barchettas, first a 600 then in 1953 with a line of 750 cm3-engined cars. Barchetta actually means ‘little boat’ in Italian, but the term referred to an open two-seater sports/racing car, for which weight and wind resistance were kept to a minimum, and any unnecessary equipment or decoration were sacrificed in order to maximize performance. The engine, transmission and suspension of all these early cars were manufactured by Moretti.

The 748 cm3 four-cylinder engine (no. 1617) boasted twin overhead camshafts and dual Weber DCOE carburettors, which helped deliver 56 kW at 8 000 r/min. It is thought to have been designed by a moonlighting Maserati engineer, possibly Alberto Massimino, as it bears similarities to pre-war Maserati racing engines. The engine features a cast-iron block and head with valves inclined at a 90-deg included angle, hemispherical combustion chambers, finger-type cam followers, and a crankcase in which the main bearings are carried in what are described as split ‘cheeses’, an extremely strong construction also used in Moretti’s single-cam engines. An adjustable secondary vent at the leading edge of the bonnet helped feed air to the engine compartment. The motor was mated with a four-speed manual gearbox the car was capable of topping 100 mph (161 km/h).

The Gran Sport chassis was an extremely strong welded structure of steel tubes made by Gilco. Suspension was independent up front with a rigid axle at the rear, and drum brakes were fitted all round. Borrani wire-spoke wheels with knock-off hub caps were shod with 14-inch tyres.

The grandiosely-titled 750S Bialbero Spyder Gran Sport featured here (bialbero means twin-cam) is chassis number 1614. The aluminium bodywork has styling reminiscent of the Maserati 300S, and it was sold to Agostino Gariboldi on 22 April 1955. On 5 June he finished 17th and third in class in the GP Mugello. Apparently, the car qualified for the ill-fated 1955 Le Mans 24-Hour but records suggest it did not arrive, a situation that may have been connected with the two factory-entered cars arriving on the grid too late as a result of an accident to the transporter on the way to the race.

Records show that on 19 March 1956 Gariboldi finished 13th in the Trofeo Vigorelli at Monza and then on 29 April entered it for the 1956 Mille Miglia as car number 212, which he completed in 17 hours 26 minutes to finish 159th overall and a creditable sixth in class. That same year, on 8 July, he took part in the Coppa d’Oro delle Dolomiti but failed to finish. In 1957 Gariboldi returned to race in the Mille Miglia on 12 May as car number 328 but again did not finish. Although it likely raced in the Swiss Ollon-Villars hillclimb in the mid-fifties, after this the car appears to have been little used and was sold in 1961 to Giuseppe Tagnozi, but as it had become uncompetitive was stored away in the north of Italy and only came to light some 40 years later.

Sliding my tall frame through the small, narrow-opening door down into the sparse cockpit proved less of a challenge than I imagined. Tiny pedals sprout from the bulkhead but the outer tubular chassis frame precludes a left-foot rest and I have to tuck my left knee into the hollow door in order to operate the clutch. The accelerator and brake pedals are very close together: narrow driving shoes are the order of the day. The seat cushion lies on the floor with a corner cut away to fit alongside the chassis cross-member. Ignition on, fire up and the little motor bursts into life, the crackling exhaust exiting from under the driver’s door.

The remote gearshift has no defined gate and is loose, so finding the 3-4 plane was initially problematic until I realised just how close it is to the 1-2 plane. With little torque low down, the engine needs revs to give of its best but once on the cam, the car feels and sounds quicker than it is but the sensation merely adds to the enjoyment. The thin, wood-rimmed steering wheel offers excellent control and feedback, turn-in has no vices but brakes need a firm push to be effective. With no protection whatsoever from the shallow, frame-less full-width windscreen, the Moretti offers a classic ‘bugs in the teeth’ driving experience that any enthusiast would savour. It is said that only around 24 of these models were produced over a two-year period, and only eight are thought to have survived.  This car is now part of the Woods Trust collection currently being looked after by FMM.

In the late-1950s, financial considerations eventually forced Moretti to turn to the more profitable business of modifying Fiats in many forms, which lasted until December 1989 when, after a number of years of decline, the company closed down. But there is no doubt the Moretti 750S is a superb example of post-war Italian barchetta designs and a delight to drive – over short distances. I can only stand back in admiration of Gariboldi lasting more than 17 hours at the wheel of this car on such a gruelling event as the Mille Miglia 61 years ago…