Posted at 12:04h in Events, Mini by fmmadmin

A regular features covering vehicles in the FMM collection that are celebrating an anniversary during 2022. This month we look at the museum’s 55-year-old Mini with a racing heart…

Without doubt, the original Mini ranks as one of the world’s most influential cars. When it appeared in 1959, it not only made motoring affordable to so many, but in doing so set some trends that invigorated an industry that had only just got back on its feet after the war years. Front-wheel drive with the gearbox mounted underneath the engine, Hydrolastic suspension, a minimalist and spacious interior with a centre-mounted speedo – the Mini was innovative and compact and cute, and destined to become an automotive icon. And, as with many groundbreaking designs, it did not take long for there to be a desire to make it go faster, a tendency that did not go unnoticed by one of Britain’s motor sport heroes, John Cooper.

John was co-founder, with his father Charles, of the Cooper Car Company and became an auto racing legend with his rear-engined chassis design that would eventually change the face of the sport at its highest levels, from Formula 1 to Indianapolis. As a friend of the Mini’s creator, Alec Issigonis, Cooper saw the car’s potential for competition but Issigonis was initially reluctant to see the Mini in the role of a performance car. So, Cooper appealed to the British Motor Corporation’s (BMC) management and in 1961 an agreement was reached that led to the two men collaborating to create Cooper versions of both Austin and Morris versions of the Mini. Austin and Morris badging was dropped in 1969 when Mini became a model line in its own right.

There were a number of Cooper and Cooper S models before the 1275 Cooper S appeared in 1965 With the help of Ryno Verster, SA’s ‘Mr Mini’, we have established that FMM’s example – body number C-A2S7 892853 and engine number 9F-SA-Y 42820 – was built in 1967 with the ‘smiley’ grille and Morris bonnet, boot and steering wheel badging and fitted with the famed SA bucket seats, wind-up front windows (referred to as ‘Australian windows’, introduced in January 1967) and twin fuel tanks. Other indentifying items included the ‘wet’ Hydrolastic suspension and an oil cooler fitted horizontally behind the grille and in front of the distributor.

This car also has a claim to fame. Sports Car Club of SA badging on the fenders is testimony to the fact that at some point this car achieved 104,251 mph (167,775 km/h) at a top speed day held at the old Kyalami. Today, the car still has plenty of go and brings a smile to the faces of everyone who drives it. Although the gearshift is a bit clunky (early Mini remote shifts were renowned for being problematic), frequent cog swopping to keep the motor buzzing is not really necessary. The Mini’s legendary roadholding is so good that tackling bends requires only occasional lifting off the accelerator – the Mini’s inherent balance is superb. What is a surprise is how relatively soft the ride is on the fluid-based Hydrolastic rubber-cone suspension that was invented by British rubber engineer Alex Moulton. Remember the Moulton bicycle of the ’60s?

FMM’s 1755 S benefits from the period modification of a lowered steering column angle, which complements the small but supportive seats to create a low-down driving position. For anyone long-legged like me, the stance is a bit ‘sit up and beg’, but it does not really matter. The S goes where you point it to the accompaniment of a surprisingly raucous exhaust note, and 55 years on is still a hoot to drive. The Mini was voted second (behind the Ford Model T) in last millennium’s Car of the Century voting, and Cooper and Cooper S derivatives were driven to competition successes around the world. Collectively they created a legacy that arguably is unequalled – a car for the people and a David amongst Goliaths in motor sport.

The Morris Cooper S 1275 is currently on view in Hall C. 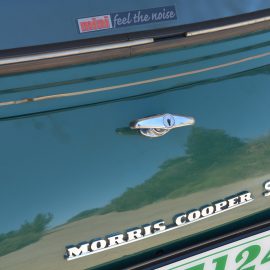 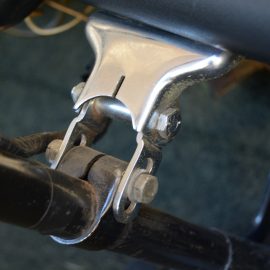 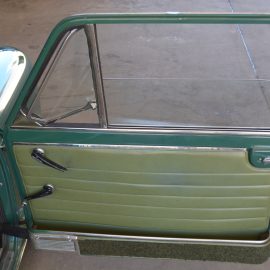