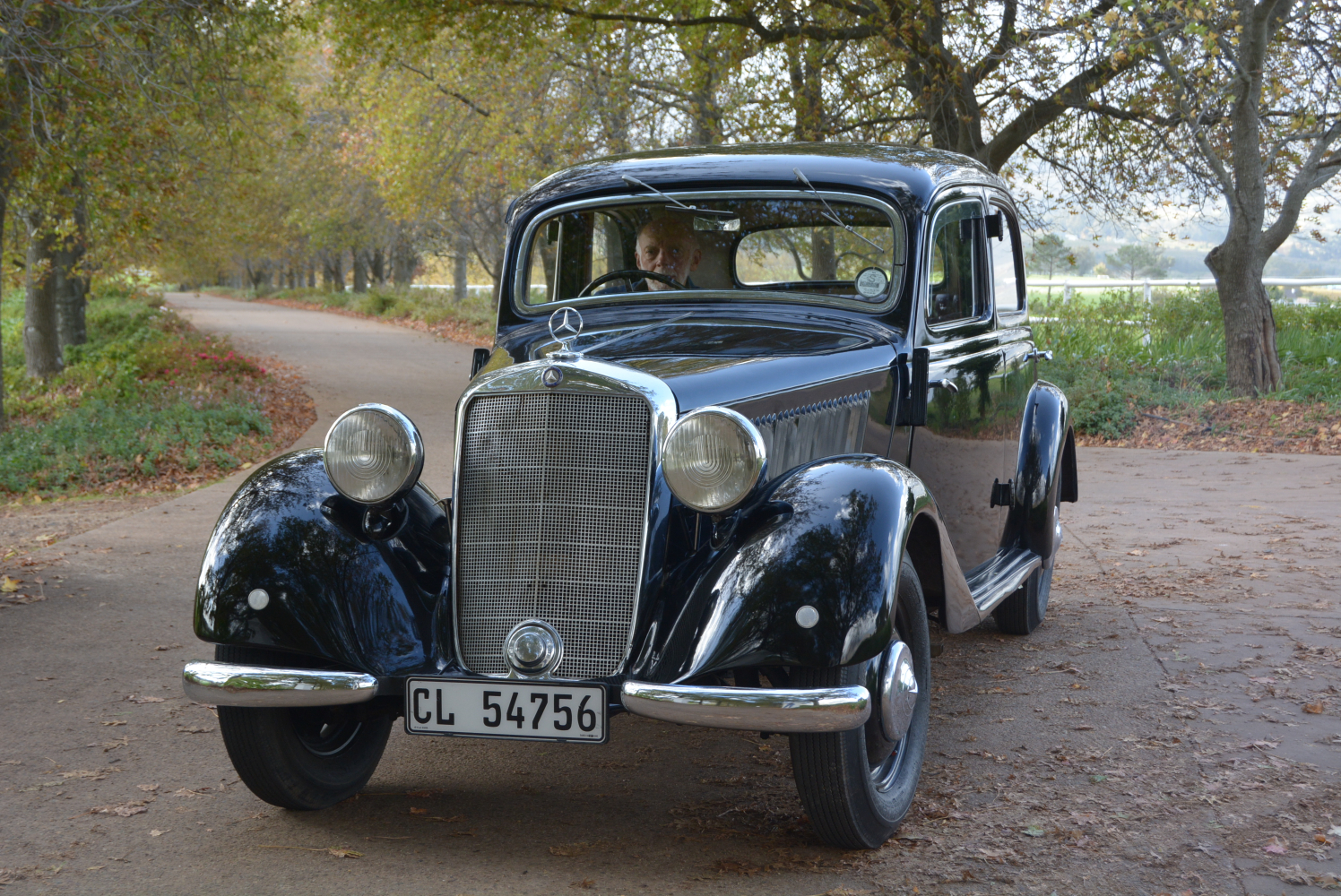 Posted at 19:15h in Events by fmmadmin

The third in a new series of features covering vehicles in the FMM collection that are celebrating an anniversary during 2022. This month we look at a 70-year-old Three-Pointed Star that helped launch Mercedes-Benz’s post-war revival…

In the early post-war period, the W136 model was the mainstay of Mercedes-Benz’s passenger car range, essentially a revived pre-war design that, despite the troubled times, was actually a significant model in the company’s history. Replacing the six-cylinder W15 series, the W136 was launched in February 1936 and represented M-B’s four-cylinder line-up. The first model was the 170 V and it was an instant success. The V in the 170 V’s nomenclature was an abbreviation of Vorn (front), added to differentiate it from the contemporary rear-engined W28 170 H model that used the same basic motor, H being an abbreviation of Heck (rear). It was powered by a new 1,7-litre side-valve in-line four delivering 28 kW at 3 400 r/min and 98 N.m of torque at 1 800, and although sitting on only two engine mountings set a standard for smoothness. The gearbox was a four-speed with synchro on the top two gears only, but was upgraded to all-synchro in 1940. The 170 V became the company’s top-selling model up to the outbreak of WWII in 1939, and by 1942 over 75 000 had been built, making it by far Mercedes’ most popular car up to that time.

Most of the cars produced were two- or four-door saloons, but the range included two- and four-seat cabriolets, a cabrio-limousine (a four-door saloon with a full-length canvas roof), and a taxi with custom luggage racks at the back. There was even a pick-up version: the X-Class is not the first Mercedes bakkie…

During the war the Mercedes-Benz plant suffered severe bomb damage, but the manufacturer nevertheless emerged from the conflict with a significant competitive advantage over many of its pre-war competitors. M-B owned its own body shop, and enough of the W136’s tooling survived the Allied bombing, or could be recreated, for it to serve as the foundation upon which the company could rebuild. By 1947, the 170 V had resumed its place as Mercedes’ top-seller, a position it held until 1953. Only delivery vans were produced at first, since they were in urgent demand during post-war reconstruction. In May 1946 the first platform car was completed, and then in July 1947 production of the four-door saloon was resumed.

In May 1949, the 170 D and the bigger, more luxurious W191 170 S were presented at the technical export fair in Hannover and were effectively Mercedes’ first post war models. The 170 D was based upon the 170 V, but equipped with a diesel version of the proven power unit of its sibling. The M136 engine was a 1697cc four-cylinder indirect-injection diesel delivering a near petrol-engine equivalent of 26 kW at 3 200 r/min and 96 N.m of torque at 2 000. The 170 D was the world’s third diesel-fuelled passenger car and the first to be introduced after the war when, for some time, petrol was in scarce supply, whereas sufficient diesel oil was available everywhere. The 170 D became the basis for the lasting success of this type of car.

In May 1950 the M136 engine was increased to 1767cc, raising maximum power to 30 kW and lifting peak torque to 101 N.m. The 170 D received other upgrades including telescopic shock absorbers, a wider rear track and stronger brakes. The cabin was widened by 50 mm allowing bigger and more comfortable seats to be fitted, while the luggage compartment finally became accessible from outside via a bottom-hinged boot lid that housed the spare wheel.

FMM’s example is an early-1952 170 D with a slightly worn patina, and it provides a satisfying – if slow – driving experience. The 170 D offered similar driving performance to the 170 V – 0-100 km/h in just over a minute – but was naturally more economical. Its looks are typical of the period with front and rear doors hinged on the B-pillar. Stepping inside is easy and the dual front seats live up to expectations; broad and fairly comfy with plenty of fore-aft adjustment. Starting calls back the past when glow plug delay was the thing, a diesel symptom that lasted into the 1980s. Once the ignition is switched on, a dash-mounted lever needs to be turned to ignite the glow plug that takes a little while to get up to heat, and then twisted to allow the engine to clatter into life. Absolutely no use as a getaway car, then…

And boy does it clatter. Put the long, spindly, bent gear lever into first and away it goes, the amount of low-down torque sufficient to get the 1 250 kg saloon up and running with no fuss at all. Naturally aspirated, the bigger capacity oil-burner goes about its business with a barely imperceptible change in diesel clatter whether hauling or cruising. A tiny dash-top rear-view mirror is all that is provided to see behind, but with a top speed a little over 100 km/h driving is more a case of simply concentrating on the road ahead and enjoying the scenery at a leisurely pace.

Ride quality is surprisingly good. The front suspension is independent with coil springs and Mercedes’ chassis engineers worked hard to progressively improve the coil-sprung swing-axle rear suspension, resulting in improved handling traits as well. The pressed steel wheels carry 5.50×16 tyres. Steering is by worm-and-ball and the big three-spoke wheel is fairly heavy in operation, typifying the solid feel of the car in general. The all-drum brakes stop effectively enough.

For a design that is basically more than 85 years old, it still impresses and represents a key model in Mercedes-Benz’s history. In 1950 and 1951 Mercedes-Benz director G Paulus toured Southern Africa in a 170 D to test the local markets. He must have liked what he saw, because the local company and its manufacturing facility, first as part of CDA then as UCDD, has grown into one of the country’s leading motor manufacturers with huge ongoing investment as a key player in the global Daimler-Benz’s organisation. But I wonder if he managed to ever have a quiet conversation with his passengers… 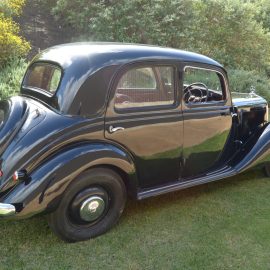 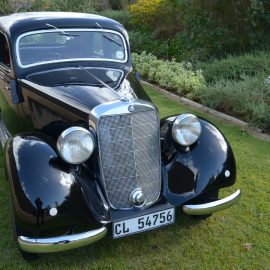 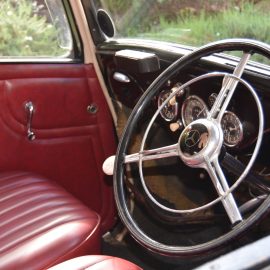 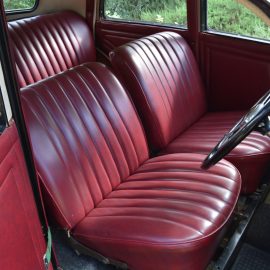 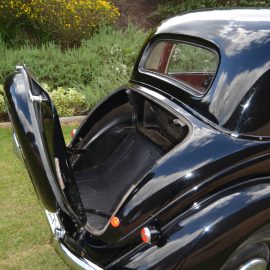 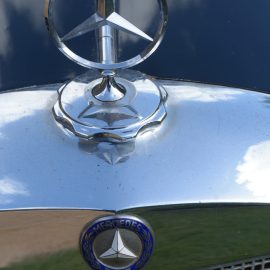 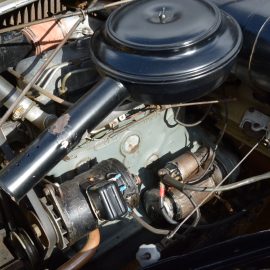